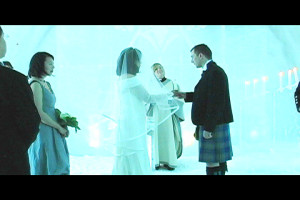 a clip from the Ice Hotel/Morocco wedding

While we’re on the subjects of “over the top” and contemporary art, I’d like to mention my most over the top Non-Texas wedding. Also in ’07, (yes, I am definitely playing major catch-up here since I couldn’t seem to find the time to set up a blog until 2009) I traveled from Scotland to Sweden to Morocco, all for one wedding. It really was the most bizarre trip of my life.

We met up with the couple in Scotland, converged with their group of approximately 28 guests in London, and then traveled  up to the famous Ice Hotel in Kiruna, Sweden… with a reception following at Villa Dar Liqama in Marrakech.

The Ice Hotel in Kiruna is one of only seven in the entire world and is totally unlike anything you’ve ever experienced. Each year, an international team of architects, designers, and artists sculpt the individual rooms in the Fall; the entire hotel is then melted down in the Spring.
Visually, the ice hotel provided a lush landscape for my movie, and I loved hanging out in the Absolut Ice Bar, drinking magical vodka potions in glasses made of ice, served by the very cute and flirtatious young Swedish bartenders, but I can, with all certainty say that I do NOT recommend sleeping in the ice hotel. Just don’t do it! I think many people have some kind of fantasy that it’s very sexy, and the reality is that it’s not…It is just plain freezing. Go have the luscious cocktails in the Ice Bar, and SLEEP in the warm hotel. 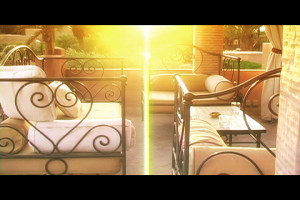 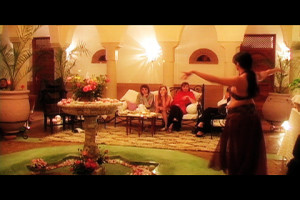